Since Wednesday 14:15, the IMOCAs taking part in the Route du Rhum - Destination Guadeloupe - the second qualifying race for the Vendée Globe 2024 - have been engaged in an intense battle. These first few days of racing have not been easy: four boats have retired and one has been lost. In the lead, the favourite Charlie Dalin (APIVIA) has not made any mistakes since the beginning!

Shortly after the start, while approaching Cap Fréhel, Kojiro Shiraishi collided with Oliver Heer (Oliver Heer Ocean Racing). Both IMOCA boats returned to the port of Saint-Malo to evaluate the damage. The damage was too serious for the IMOCA DMG MORI Global One and the Japanese skipper has officially declared his retirement. Oliver Heer carried out repairs and then made a second stop in Port-La-Forêt to get the boat out of the water and carry out the final checks. He is now back in the race.

Nicolas Rouger (Demain c'est loin) also returned to the port of Saint-Malo for a short stop after crossing the start line. 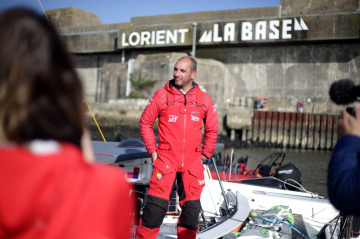 During the night of Thursday to Friday, Damien Seguin dismasted after hitting a cargo ship. The skipper of IMOCA Groupe APICIL made it back to his home port on Sunday, under engine and towed by the "Libertykite" system (developed by the sailor and engineer Yves Parlier following his dismasting in the 2000 Vendée Globe). He spoke about the boat damage on arrival at the dock: "The starboard foil is completely delaminated. It's going to be a big job to get it out of the boat! The mast is obviously broken. I've also lost a few sails and then the hull has some small bumps, but nothing dramatic. That's the good news. There are a few impacts on the deck, but nothing irreparable or too damaging. The sailor is therefore going to move forward with the work initially planned after the transatlantic race. He is already looking ahead to the 2023 season!

Late on Saturday, Louis Burton also dismasted. After securing the boat, the skipper of Bureau Vallée tinkered with his outrigger (oblique spar used as a spreader on an IMOCA boat) to make a mini mast on which to put his storm jib. "I'm happy to have managed to put up this mast, it was no mean feat! I've seen it in the Vendée Globe adventures, but I've never had to do it, it's not easy! I'm doing 5/6 knots", the skipper from Saint Malo is currently heading towards Corunna. 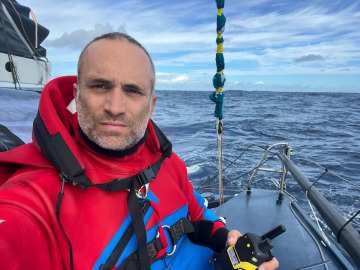 © Fabrice Amedeo / ImocaOn Monday, the IMOCA Nexans - Arts & Fenêtres sank off the Portuguese coast. Following a leak in the living area caused by the rupture of the starboard ballast tank the day before, the sailor had no electricity. An explosion occurred on board, resulting in a fire. Fabrice Amedeo alerted the race management and hit his life raft to leave his boat. A few hours later, he was picked up by a cargo ship rerouted to carry out the rescue operation. He is uninjured and is expected to be landed in Ponta Delgada on the island of São Miguel in the Azores today.

On the doorstep of the Tradewinds

The IMOCA fleet has not been spared by the weather on this 12th edition of the Route du Rhum - Destination Guadeloupe. During the day, the leading group led by Charlie Dalin - a solid leader - and made up of Jérémie Beyou (Charal), Thomas Ruyant (LinkedOut), Paul Meilhat (Biotherm), Kevin Escoffier (Holcim - PRB) and Maxime Sorel (V and B - Monbana - Mayenne) should be reaching the trade wind to finally sail downwind. Since the start of the race, the sailors have gone through several fronts, upwind. Thomas Ruyant, despite having completed the Vendée Globe 2020 on this same IMOCA LinkedOut, testified yesterday to the violence of the conditions encountered: "It's amazing how quickly we forget this absolute discomfort, this violence. So much the better, because we would find it hard to go back." Despite all, the battle is raging at the front, which Jérémie Beyou is not unhappy about: "It's close because the boats' speeds are very similar, especially Holcim - PRB and LinkedOut upwind," he said. The skipper of Charal ironically says: "The objective at the end is not to finish ahead of those behind, but to finish ahead of the one in front!" The one in front - Charlie Dalin - has been putting on a real show since the start on his APIVIA, which he knows perfectly well! However, there are still nearly 2000 miles to go before reaching the butterfly island...

The beginning of a Vendée Globe project: to Guadeloupe and beyond!