Home News Alex Thomson:"What they want is to have a father"

Alex Thomson:"What they want is to have a father"

To many it comes as a shock, even if he has been unusually quiet since he had to retire from the last Vendée Globe. But today British skipper Alex Thomson confirmed that he will not compete in the 2024 Vendée Globe and plans to move on to work with a new, younger generation of skipper or skippers.  He made his emotional announcement at a press conference today Monday October 25th in Paris.

Alex why are you not going to carry on and do the Vendée Globe 2024?
A.T.: In essence it is for personal reasons. Now is the time to for my family and my children. Kate, my wife has talked more about our kids’ sadness at not seeing enough of me. And when I met her she had her own personal goals, so did I, but she was the one who made things work at home while I pursued my goals. But now it is time to give her the opportunities she gave me. I love this sport but it's time for me to spend more time ashore with my family. Before I was at home only three or four months a year. My oldest son is now 10 years old and the Vendée Globe is a big all-consuming challenge. Back then I suppose I thought it was cool for my kids to have a famous, well known, pretty cool dad. What they really want is to have a father.

Do you give up with regrets?
A.T.: I must have said to you before that before the finish of the Vendée Globe 2016, I called my wife to tell her that I was planning to stop after all this the Vendée Globe 2020. What happened on this last edition (his retirement after three weeks of racing, editor's note) made me feel massively cheated. So I did want to go back. The goal has always been to win the Vendée Globe. It remains the most difficult sporting challenge in the world, and we still have not achieved this goal. But I don’t feel like going again.

We won't see you on the start line off Les Sables-d'Olonne, then?
A.T.: I’m giving up on the Vendée Globe 2024 but I’m not discounting 2028. If I feel like I’m not there with a chance of winning, I won’t do it. I have to be strong, and tough (to go back), because I don't want to do a 'compromised' race. But I know that I cannot turn my back on the Vendée Globe.

What are you going to do now?
A.T.: My life is in this sport. My first responsibility is to be an ambassador for the sport. For the next four years I would like to work with a skipper or skippers and find partners. Why not a French skipper? Why not an international skipper with an international brand? I'm sure I will be able to enjoy helping a skipper win the Vendée Globe as much as if I did it myself

Really, could you do that as a successful skipper, to remain on land?
A.T.: Yes, I started out in this world in a support, shore team role for Sir Robin Knox-Johnston and I was very happy with that. On the Vendée Globe everything happens three years before the start. That is when we choose the people, we make decisions that have the key impact on the outcome of the race and that is all part of the adventure. The passage to get to the start line is super exciting, and I know I'm good at finding partners, because I have something very interesting for them. 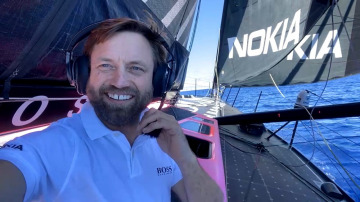 A.T.: Yes, there is no equivalent in the world. I went to do an interview with Bloomberg some time ago. The reporter didn't know me. I told him my story, and he was flabbergasted. He said... “Come on let me introduce you to Michael Bloomberg” (the founder of the channel who is a passionate sailor, editor's note). He took me to meet him and I told him things and they absolutely fascinated him. The strength of the Vendée Globe is that it is not only the likes of my story that is exceptional: there is that of Pip (Hare), Yannick (Bestaven), Louis (Burton) - what an incredible life and work it is. Like Louis. Behind each edition of the Vendée Globe, there are all always all these stories!

Do you have any idea what kind of skipper you would like to work with?
A.T.: We already have had discussions. There are no preconception about gender or nationality, they might also come from a country that does not really follow the Vendée Globe. But for example, I would have loved to work towards a win with Sam Davies, who is both a woman and an Englishwoman, even if you try to believe she is French (laughs). But I would like a youngster with raw talent, for whom the AT Racing team would be the complete vehicle to allow him or her to develop. But this skipper needs to be a skipper, a leader, not me. The team needs to believe in and follow the skipper. It's up to me to deliver what the skipper needs, I have a little experience in that I think.

What could be his or her background?
A.T.: They might could come from the Figaro class, because we see that the sailors who come from that circuit often perform well on the Vendée Globe, but the Figaro class requires one-design skills, so you still have to be attuned to technical development. The Mini class and Class40 are also be good stepping stones.

What do you see as the progression?
A.T.: To have a Vendée Globe project you have to either find a sponsor and then look for the skipper, or find a skipper and find the sponsors.

What do you see as your real strengths? 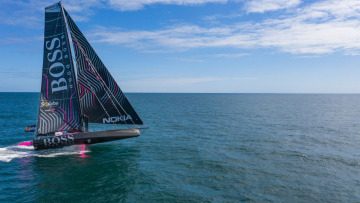 A.T.: After eight big around the world campaigns we have learned a lot. We have designed and built some of the most innovative, technical boats in the class and our 2016 Hugo-Boss was considered the benchmark boat of her generation. We will continue to draw on that high level of experience in the design and construction of boats to build new, successful campaigns. I look forward a campaign which will take us to the start of the Vendée Globe in 2024. What I do know is there is a massive gap between the mindset of a skipper racing their first Vendée Globe and the mindset you need to have to put yourself in a position to win. It’s a huge jump. And technologically these boats have also made a huge leap in four years.

How did Hugo Boss, your sponsor, react?
A.T.: My partner was quite surprised when I told them that I would not go again in 2024, but they support my choice. I have had the privilege of being able to rely on them for 20 years and I believe that I have made Hugo Boss an important brand in the world of sailing. My contract runs until the end of this year but I do also think the Group's strategy will change. I don't know if they would have supported me if I had wanted to go again in 2024

Does that have a bearing on your decision?
A.T.: Not at all, my decision is a family thing. It is not an idle boast, I think I would have found a new partner quickly if I had wanted to go.

Have you already made progress on a possible 2024 project? 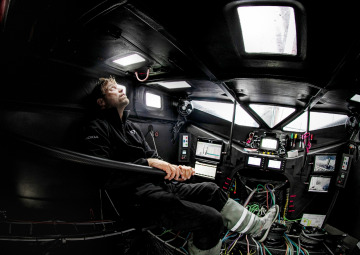 A.T.: The current Hugo-Boss has been sold; we've already agreed a handover warranty and the rest is to be concluded in a matter of weeks. It allows us to free ourselves from debt. It was not easy: I love my boats with my heart. For a potential project, I would like to work again with the Carrington Boats which is not the cheapest, but they are the best in the world in my opinion, and with Jason Carrington, he himself is a passionate artist. I would also like to work with VPLP again. I've worked with a lot of talented architects, but VPLP are open minded when you come up with things (like my cockpit, for example). Antoine (Lauriot Prevost, naval architect) came to sail aboard Hugo Boss when we left South Africa after the abandonment. We accumulated 10,000 miles of data. My drive is to maintain some continuity in our operation, which is very important. Absolutely honestly, Jérémie Beyou's compromised race and my abandonment just broke my heart, it hurt also for the designers who had had made two of the most beautiful boats in the fleet. I still feel indebted to them.

You might maintain some kind of partnership with Hugo Boss, but what about Nokia?
A.T.: That contract also ends at the end of the year, but we are talking about the future. Nokia has allowed us to learn a lot about the way I sail. The company also worked on the autopilot. The great new frontiers at the moment are with artificial intelligence, which will change our lives. A solo race is an excellent demonstration tool: there is so much to do when you are alone on a boat! "