Home News How to take part in the Vendée Globe 2024?

From edition to edition, the success of the Vendée Globe is growing.  In 2020, 33 competitors took the start of this unique round the world race. There have never been so many! In response to the growing enthusiasm of the sailors, the number of participants has been increased to 40 skippers for the 10th edition in 2024. To face the success of the event, the organization has defined conditions in order to participate. If the number of candidates meeting these requirements exceeds the quota, a selection system has been established.

Qualification, a guarantee of reliability

To take part in the Vendée Globe, the skipper and his/her boat must first qualify. This qualification concerns all the skippers who will be taking part in the 2024 Vendée Globe. The aim is multiple: to certify the skipper's skills, the regularity and reliability of his/her project. This qualification guarantees that the boats are sufficiently tested to sail around the world. It was designed to optimise the safety of the sailors. The system has proved its worth, as the abandonment rate has never been as low as it was in 2020, the year it was introduced. Less than a quarter of the fleet abandoned (24%) during this edition.

The conditions to qualify are :
Each IMOCA/skipper pairing must be at the start of at least two qualifying races (one in 2022 or 2023 and one in 2024). The skipper must finish at least one of them and his or her race time must not be more than one and a half times faster than the winner's time. The qualifying races, contested single-handed, are
- Vendée Arctique - Les Sables d'Olonne 2022
- Route du Rhum - Destination Guadeloupe 2022
- Transat Jacques Vabre 2023 (Retour à la Base)*
- The Transat CIC 2024
- New York - Vendée 2024 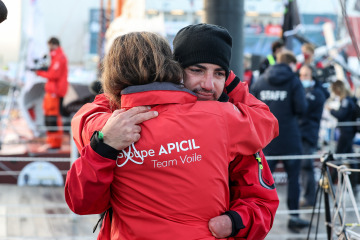 An objective selection, based on the number of miles sailed

The last race before the Vendée Globe, the New York - Vendée, organised by the SAEM Vendée, will be an exception as it will be sailed single-handed, but for every mile sailed, 1.5 miles will be counted.

For the selection, unlike the qualification, the miles are only counted by the skipper, even if he or she is sailing on a boat that is not the one on which he or she will be competing in the Vendée Globe. If a skipper abandons a race, the miles he or she sailed before abandoning are counted.

If two skippers have the same number of miles sailed, they will be separated by their ranking in the IMOCA Globe Series Championship after the New York - Vendée race.

Exceptions: no selection process for 13 new IMOCAs and for the wild card. The term "new IMOCA" is used to refer to IMOCA boats built to compete in the 2024 Vendée Globe. For the first 13 pairs - new IMOCA/skipper - that will be at the start of a qualifying race, the selection process will not be applied. Indeed, the Vendée Globe organisation wanted to allow skippers with a new boat project not to be disadvantaged by the selection by miles sailed. They will automatically be selected. In the Vendée Arctique - Les Sables d'Olonne, the first qualifying race, no new boat/skipper pairing competed in the race. Jérémie Beyou was at the start, but on his old boat, so that doesn't count. In the Route du Rhum - Destination Guadeloupe, the seven IMOCA new boat/skipper pairs : Sam Davies (Initiatives Cœur), Yannick Bestaven (Maître Coq V), Kevin Escoffier (Holcim - PRB), Paul Meilhat (Biotherm), Jérémie Beyou (Charal), Boris Herrmann (Malizia - Seaexplorer) and Maxime Sorel (V and B - Monbana - Mayenne) will be counted as part of the 13 new IMOCA boats exempt from the selection process after the start of the race, subject to fulfilling the qualifying conditions described above.

Another skipper - who meets the qualification requirements - will not be subject to the selection rule. This is the skipper who will benefit from the wild card given at the discretion of the organisation.

In total, 14 skipper - IMOCA pairs will escape the selection process. However, all the competitors who will take the start will have to fulfill the qualification conditions.