Now, just these past days having turned 46, Eric Bellion - who was one of the best rookies of the 2016-2017 Vendée Globe - is is off and running again. Always a skipper to champion diversity and inclusion, the indefatigable Bellion intends this new programme for the 2024 race to be more collective than ever. His ideal is to  gather together several skippers, to pool and share resources across the team and to "contest the most solitary of sporting events" with a mutually supportive collective, getting several sailors to the start line. He always shares his  adventures widely, expressing his doubts as openly and widely as his enthusiasm. He talks of the utter “feeling of harmony" which animated him for 99 days during his Vendée Globe in 2016-2017. He always seeks to ​share, to tell and animate his story. He describes himself as "an average guy" who has proven capable of surpassing himself and finding and summiting the personal mountains we can all climb during its lifetime.

Recall that last time his project was called ‘CommeUnSeulHomme’ (like one man alone) but even so, like many others he has never really defined himself as a loner. Now he is proving more than ever that he is a team player, an advocate of mutual support and collaborative success. Now here he is in the spring of 2022 setting up with his sponsor, Altavia, "the first Vendée Globe team". He sees a structure to accommodate several skippers - a maximum of four - all working together to climb every step that leads to the Vendée Globe.

He is starting out with a boat rented from Jean Le Cam for this season. But he has a new IMOCA  in build with 'King Jean'. Éric Bellion talks about his roadmap and the visceral and emotional link with the Vendée Globe, the race whose spirit has never left him even although he has completed it once.

Eric why did you decide to commit to the Vendée Globe again?
“I had the incredible good fortune to have completed my race without any frustration, just feeling incredible happiness. I set out to tell a great story and it all went way beyond my expectations. And there I was finishing ninth, first rookie with the second most quoted project in the media. I promised myself never to do it again. I wanted it to box it up and keep it as a totally unique adventure. But what I hadn't anticipated is that the Vendée Globe always lives on in me.

When did the desire bubble up again? 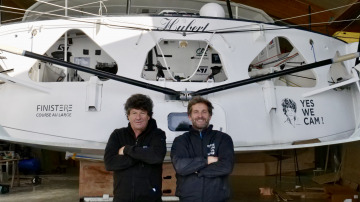 © Comme Un Seul HommeDuring the last edition, I had unconsciously prepared everything so that I would be thousands of kilometers away. I was to be in the Pacific Ocean on my schooner, far from networks, far from everything. But Covid changed the situation and forced me to stay in France. France Télévision asked me to do a column during the Vendée Globe and there it was. I found myself back in Les Sables d’OLonne in the village. It was crazy ironic. And there all my repressed emotions came back and slapped me in the face, like it was quite violent.

How do you describe that special moment, reconnecting?
I had taken my car to be in the village. On opening day at 7 am I stepped onto the IMOCA pontoon and burst into tears. It was as if I couldn't mourn it being in the past. It was as if the Vendée Globe was stronger than me. I wanted to leave. I spoke to my partner about it and she said to me: “I know. This has been with you since you finished in 2017”.

You were very much committed to telling your adventure, you had a film that told the whole story?
There are challenges we do in and live in the moment, at the time. And then we discover more afterwards. All the adventures in my life, I loved telling everyone about them, explaining them. My story was that of an average guy who goes beyond his fears. There was a very universal aspect. And with the film it was diving back into my emotional journey, continuing to experience the magic of the Vendée Globe and the state of grace, the feeling of harmony that I had experienced.

Five years later, you're back with a particularly innovative idea that you unveiled a few days ago...
The idea is to create the first collaborative team, the first collective of the Vendée Globe. While respecting the rules of the Vendée Globe, the calendar and the requirements of the IMOCA, we wish to have several boats and several skippers, all very competitive all looking to race in three years time. The goal is to share everything: the development and reliability of the boats, training, physical preparation, the search for sponsors. A collective allows us to support each other during difficult times, to work on our weaknesses, to help increase everyone's abilities and, ultimately, to enhance their objectives. In addition, this will reduce costs but also to have one new boat project that will have the lowest carbon emissions. It's quite extraordinary to think of competing in the most solitary event while at the same time demonstrating the power of the collective, of collaboration.

To launch the project, you rented Jean Le Cam's boat and commissioned the build of a new IMOCA…Yes, Jean rented it to us for the year 2022 in order to do all the season, to fine tune our skills and accumulate miles and gain experience. At the same time, we are going to build  new boat, co-designed with Jean and with the full support of Altavia. This monohull with straight foils, which will be launched in the spring of 2023, is the result of our shared reflections. It will be practical, efficient and durable. We will reveal who the architect is soon and what yard will be builders.

“Do everything to achieve the best possible result”

Is this an 'adventure' project or is there a desire to be competitive? 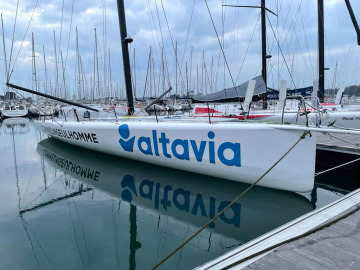 © Comme Un Seul HommeThere is no question of making a new boat just for the adventure. Besides, I never positioned myself as an adventurer, even in 2016-2017. We are going to prepare the boat like the big race teams and do all we can to achieve the best possible result.

Can you say more about the profile of the skippers who will accompany you?
Already, there are as many skippers as we have boats and we don't want any internal competition. We have selected several potentials and we will meet them and evaluate. The idea, to promote the collective, is that each of the members can have their say so that this already contributes to consolidating and strengthening the collective.

And so presumably that includes the Route du Rhum in your sights. How do you feel about returning to competition?
It is a very strange feeling, both apprehension and excitement. The last time, I was learning everything. And everything scared me. It was a big leap into the unknown in an environment that I knew little about. Now here I am I know that the bar is higher but I have more experience and it's a new feeling to deal with".