Home News Louis Duc: "This is a boat which wanted to go again"

Louis Duc: "This is a boat which wanted to go again"

Since the start of this year, Louis Duc and Marie Tabarly have been discovering how an IMOCA programme runs. Long term they have different ambitions, he wants to take on the Vendée Globe, she the Ocean Globe Race in 2023 aboard her father's legendary Pen Duick VI.

Nowadays the qualifying route to take part in the Vendée Globe 2024 has many key stages, boxes to be ticked and for Duc that starts with the Transat Jacques Vabre which starts this coming November 7. But until then Duc, 37, and Tabarly also 37, have a lot to accomplish. Duc and his team have restored the Farr designed IMOCA which was Clément Giraud’s but which he had to abandon after it caught fire in Le Havre prior to the last Transat Jacques Vabre race in 2019. The boat is renamed Kostum Lantana Paysage.

How did this all start?
Louis Duc: "When we started out on this adventure last October there was nothing in place. We were far from being able to go sailing this year far less considering the prospect of being at the start of theTransat Jacques Vabre. And so we have really got a lot done, achieved a lot and it has all been very enjoyable. Marie joined the project at the beginning of March after we talked of our ambitions and the opportunities and she has also been very helpful in finding the operating budget for this year.

Marie Tabarly: "Listening to Louis I am smiling because there was so little in place, but we have put all our energy, all our enthusiasm into restoring this boat, one which clearly wanted to sail again. The project is really complementary to what I am doing and so the planets aligned and the problems melted away, our meetings were good, the budget was mustered and the composite materials for the boat are of high quality. We have already sailed on the boat and it is on the mark.

Louis Duc: From the beginning there were good vibes. In 48 hours, 170 people had joined the bond project that was our first income in terms of financing the boat. As we could not borrow money as we had no sponsors, we started up this thing which is a version of a normal real estate investment, with a return on investment of 2%, based around  "Your savings around the world" project. It’s not money wasted but it’s support from the heart. Then Lantana Paysage, who has been following me for a while, got involved, and Kostum Cadiou joined us this summer.

How did it get off the ground in the first place? 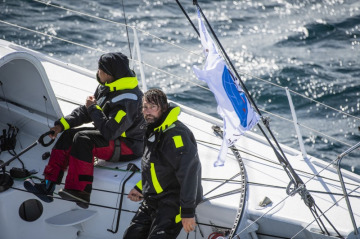 © Bernard le Bars Louis Duc: With my two partners (Marc Dewavrin and Jérôme Lepoutre), after our campaign in in Class40, we bought what amounted to little more than a wreck, the 2007 Farr design which you will remember caught fire in the port of Le Havre two years ago. Variously it had a long history (as PRB, Akena Vérandas, Initiatives-Coeur, Bastide - Otio, Maître-CoQ, Fortil) and so it had evolved a lot. But of course at the same time, we saw the Farr sistership up near the front in the Vendée Globe, Yes We Cam! by Jean le Cam. That is to say we saw such potential. We then assembled a team of experienced technicians who we know well, very professional and very caring people, who understood our problem, we were looking to make a decent, better boat with not a lot of money.

What do you think is special about your programme?
Marie Tabarly: The idea of racing ​​a boat that we have saved touches people. This boat is a phoenix. We save it from the scrap yard and it carries our values. And people know that Louis and I are a just little bit mad but all in all very concerned about the environment, and we'd rather get on and do things right than just talk about it. They know that with us they we are the real deal, we are authentic in what we are trying to do and in the end form a coherent trio (with the boat, editor's note)

Louis Duc: Marie's profile is much higher than mine and that has been good for us but it was the restoration story that appealed. This is what has allowed us to be nearly ready to go racing.

How will it be on the water together?
Louis Duc: Our shared experiences on the water is incredible: we did the Zodiac together in 2003! (laughs) We've known each other for a good few years. We haven’t seen each other so much, but we kept in touch. And everything happens naturally: we have the same love of the sea and boats. That underpins everything.

Marie Tabarly: Louis has a great maritime culture and that is very much essential for me. If he didn’t I would not be here.

What are you looking for in this Imoca project? 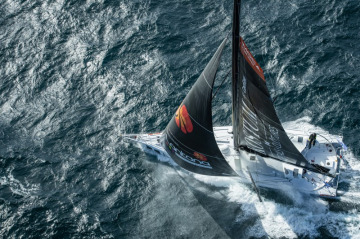 © Bernard le Bars Marie Tabarly: It’s incredible good fortune for me who does not come from the Mini-Figaro-Class40 background. I have sailed on a lot of different boats, so Pen Duick VI, which I will be racing on the Ocean Globe Race 2023 which borrows from the Whitbread spirit and follows the same course as in 1973. Louis knows where my shortcomings are but he also knows that I'm not afraid of commitment, physical effort and the power of the ocean.  And I can work my sextant! Basically, I'm looking for a big experience on a boat that represents a high level of performance in the monohull world and I have a lot to learn. Being a skipper myself on my own projects I likely won’t progress in all areas. But here I will have an opportunity to progress in my knowledge of routing, the weather, the management of the boat and trim, stress and so on. I do  not know how many times such an opportunity will come my way and so I had to take it! "

The countdown is on and time is ticking……
Louis Duc: We have two months to be ready. We won't be among the best, top performers, but the goal of the Transat Jacques Vabre is most of all to just discover the boat, to optimize it, to sail well. We have a lot to do to get there, but we already know as a boat it should be reliable and secure. I have no doubts that we will do OK. And looking towards the Vendée Globe goals, it's a good trial.