38 IMOCAs will be at the start of the Route du Rhum - Destination Guadeloupe on Sunday 6th November. The prestigious and undecided transatlantic race is very important for qualifying for the Vendée Globe.

The enthusiasm and popular support experienced during the last Vendée Globe, in the winter of 2020, is still there. And the IMOCA skippers who took part and dream of being in the next edition, in two years time, will be able to taste their incredible popularity in Saint-Malo. The corsair city is indeed the starting point of the Route du Rhum, which will take place on November 6th. Beyond the sporting challenge and the desire to win a legendary race, everyone knows that the race is very important for the future Vendée Globe.

Indeed, the Route du Rhum is the second qualifying race for the 2024 Vendée Globe, after the Vendée Arctique which took place last July. No new IMOCA/skipper pairing took part in the latter. By taking part in the Route du Rhum, the seven new boats will ensure that they are included in the "list of 13 new boats" and thus avoid the selection process (but meeting the qualification requirements). To find out more, read "How to take part in the Vendée Globe 2024".

"Fighting at all levels"

For the whole fleet, it will also be an opportunity to confront once again the excitement of the starts, the weather conditions which can be testing and the need to keep one's cool. “What's nice, with 38 boats, is that there's a match everywhere, as much in the front, in the middle and at the back of the fleet,” enthuses Isabelle Joschke (MACSF). There will be a fight at all levels! The fight for victory promises to be an exciting one, especially as the forces involved have changed since the last edition. Four years ago - which seems like an eternity ago - Paul Meilhat won his last race with SMA and his two pursuers, Alex Thomson and Yann Eliès, have since retired from the competition.

Paul Meilhat has a new boat. Aboard Biotherm, APIVIA's sistership, he will be keen to gain experience and confidence on board, especially as he will be taking part in The Ocean Race from January. A succession of races will also be on the programme for Holcim-PRB (Kevin Escoffier), Malizia-Seaexplorer (Boris Herrmann) and Guyot environnement - Water Family (Benjamin Dutreux). In unison with his colleagues, Kevin Escoffier assures us that he "inevitably lacks the sailing time to be competitive" and that he wants "above all to finish the race". For him, "the favourites remain the 2020 generation boats. They are reliable, versatile and their skippers know them well". 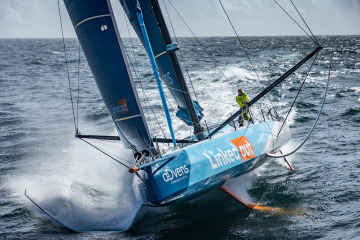 © Pierre BourasCharlie Dalin (APIVIA) and Thomas Ruyant (LinkedOut) seem to be one step ahead. The two men, who are currently building a new IMOCA, will be racing their last race on their current boat. Their very detailed knowledge of their boat, as well as their talent, is no longer in question. Thomas Ruyant won the Transat Jacques-Vabre last year, Charlie Dalin is unbeaten this season (winner of the Guyader Bermudes 1000 Race, the Vendée Arctique and the 48h Azimut Solo). However, the sailor from Normandy has never competed in the Route du Rhum before. An incongruity that makes him smile: "It was time to correct that! However, it is a reference transatlantic race, it has always made me dream".

Many of the skippers are thirsty for victory

Alongside Charlie Dalin and Thomas Ruyant, Jérémie Beyou is hoping to play the spoilsport. Of course, Charal2 is one of the new boats. But she was launched at the beginning of July and since then, Jérémie Beyou, supported by his technical team and Franck Cammas - who has been advising him since the start of the project - has sailed a lot. Although the distance was short and can't allow any conclusions, he managed to keep up with Dalin and Ruyant during the 48h Azimut Solo (3rd).

More generally, Maxime Sorel (V and B - Monbana - Mayenne), Kevin Escoffier (Holcim - PRB) and Sam Davies (INITIATIVES-CŒUR) on board their new boats, have also shown that they can keep up the pace. It is difficult to predict the 'top 10', as there are so many contenders for victory. Boris Herrman (Malizia - SeaExplorer), Louis Burton (BUREAU VALLÉE), Benjamin Dutreux (Guyot environnement - Water Family), Justine Mettraux (TEAMWORK.NET), Romain Attanasio (Fortinet - Best Western), Giancarlo Pedote (PRYSMIAN GROUP) and Damien Seguin (GROUPE APICIL) have all been added to this list... 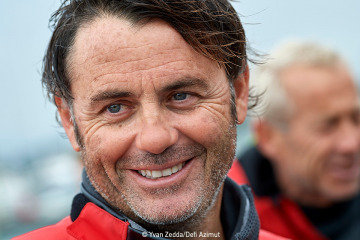 © Yvan ZeddaAlso, everyone will be keeping an eye on another boat that will be racing for the first time: Maître CoQ V. It is indeed the great return of Yannick Bestaven - winner of the last Vendée Globe - who will be racing for the first time aboard this sistership of 11th Hour Racing - Mâlama. "The objective of the Rhum is more to sail than to perform. These two transatlantic races, with the return trip, will be an opportunity to learn more and to get stronger for the Vendée Globe 2024." A thought that sums up the state of mind of the IMOCA fleet before this Route du Rhum: dreaming of a great crossing and a happy ending in Pointe-à-Pitre, while keeping in the back of their minds the desire to fight it out in the most famous of all round the world races.