Home News Denis Van Weynbergh and Szabi Weöres: alone at sea, but helping each other ashore

One is Belgian and the other Hungarian. Denis Van Weynbergh (Laboratoires de Biarritz) and Szabolcs Weöres, nicknamed "Szabi" (SZABI Racing) saw their unexpected friendship grow during the Vendée Arctique. After retiring from the race, the two skippers carried out their delivery trip home aboard Denis’s boat from Iceland. A voyage that taught these Vendée Globe minnows a lot.

Denis Van Weynbergh’s orange and turquoise boat is moored up in the harbour in Zeebrugge, Belgium. The skipper is getting over his Vendée Arctique. After losing his rudder and injuring his thigh (a tear in the thigh muscles) he was forced out of the race a few miles from the finish in Iceland. "I was very disappointed about having to retire, as my goal was really to cross the line and get my qualification for the Vendée Globe," admitted Denis. "Having said that, it’s in the face of adversity, that you learn the most. It may have been a failure in terms of racing, but it was an enriching experience for me.”

Learning how to deal with a crisis

It was during this retirement that the Belgian skipper and his team learnt the most: "It taught us how to deal with the crisis, but what to do after the crisis too, as that is a different matter. Finding the solutions to get a rudder to Iceland at a reasonable price is not that easy."

Managing the logistics and coping with the emotions too. For the shore team, discovering that Denis was injured on a boat where the damage could not be evaluated was worrying. Yet, as he likes to say, "When dealing with uncertainties, you grow up fast.” 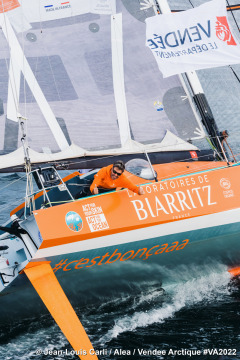 Concerning the team, a small detail has its importance: it only includes volunteers. Most of the time, the sailor takes care of everything himself: he pays the bills, finds the partners, sends out official letters, trains, writes his press releases and manages social networks… "It’s like running a Champions League team, but with a group of volunteers."

Today, the sailor, who has moved to Les Sables is looking for one or two major partners to complete his budget. "The fact that we worked so hard to try to cross the finishing line of the Vendée Arctique in spite of everything that happened, has strengthened the credibility of our project and we can see people are interested in our story."

There are no new races scheduled this year, but while he is dreaming of the Route du Rhum, Denis is on the reserve list.

2023 will be given over to training and will be used to clock up the miles with the Rolex Fastnet Race and the Transat Jacques Vabre. But the sailor hopes too to experience new things: "It would interest me to be able to do one or two legs in the Ocean Race, as it is always a good thing to race against others and to get out there on other boats."

Meanwhile, the skipper sponsored by the Laboratoires de Biarritz intends to make changes to his IMOCA this winter; if the budget allows that. New sails, modifications to the rudder to make sure it is better attached to the hull…  details according to Denis, as his boat (formerly the boat sailed by the Hungarian, Nandor Fa) remains the ideal companion. "I remember Nandor did well in the Southern Ocean aboard her and I can see why. With a few improvements, she has a lot of potential to sail smoothly, cleanly and be fast, while remaining safe in those waters."

The hand of fate or a mere coincidence, it was this very same Hungarian boat that led to a fantastic encounter. 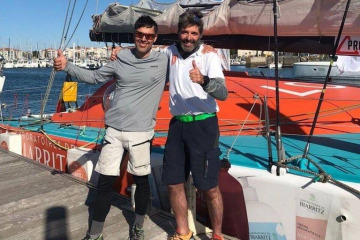 Last June, when Denis Van Weynbergh was forced to retire in Iceland, he found himself alone in a fjord without a shore team and lacking the means to repair his boat. It took just one phone call for another Hungarian competitor, Szabi Weroës, to pack his bags in the next few hours and jump in the first plane for Reykjavik.

"To be honest, when I got the call to go and join him and help him repair his boat before sailing back to les Sables, I had no hesitation in accepting the invitation,” smiled Szabi. “It was important for me to be able to do something for him and it was a great opportunity for me to be able to continue to make progress in the IMOCA class. I was proud that Denis thought of me. I think he saw my technical skills, and after all, his boat was built in Hungary."

Back in Les Sables d’Olonne in early July, Szabi Weöres got back with his own boat and sailed away again with the Russian skipper, Irina Gracheva. They sailed for three days to test the electronic and electrical systems aboard the boat. The outcome was the whole electrical system needed changing for some new gear that would perform better.

Sailor, electrician, logistics expert… Like Denis Van Weynbergh, Szabi does not have a big team. He is solely in charge. "It is obvious that for small teams like ours, we have to help each other out and work together, as getting to the start line of the 2024 Vendée Globe is not that simple." 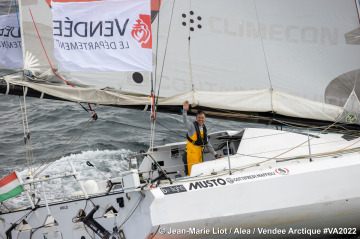 Fortunately, the Hungarian skipper can also rely on his partners who decided to continue the adventure with him, in spite of his early retirement from the Vendée Arctique. "My sponsor saw that I was doing my best and working all out to get this project up and running,” explained Szabi. “We drew up a four year campaign schedule. So, we are continuing to make progress and they are pleased to see I’m doing what I can.”

Setting up such a project requires a lot of personal investment and commitment at all times. "Combining my private life and the sporting challenge is harder than I thought,” confessed Szabi. “Generally, I say that I work around the clock and then again at night. I don’t have any time to myself to do anything else. It’s also very hard for my family back in Hungary. My wife is doing a remarkable job with my three kids."

Now, Szabi Weores would like to focus on preparing himself physically and mentally to be in with a chance of competing in the next edition of the Vendée Globe in 2024 and following in the footsteps of a certain Nandor Fa.