Harayda sets his course at the vanguard of a new generation

In a few days time young British skipper James Harayda will take over his new IMOCA 60, Stéphane Le Diraison’s 2007Groupe Finot  designed and built A Time For Oceans, and his ambition of taking on the 2024 Vendée Globe takes one enormous step forward. But first he had the serious business of officially launching his Gentoo Sailing Team challenge for the Vendée Globe in London at the Royal Ocean Racing Club this Wednesday,

Young and ambitious Harayda is just 24. His  IMOCA experience to date is quite limited, amounting to a couple of months sailing with Alex Thomson on the most recent Hugo Boss. But for all that, he is totally realistic and objective about how steep the learning curve will be but Harayda has an excellent mentor in Dee Caffari who finished sixth in the 2008-9 race and who, of course, has sailed or raced round the world six times.

Caffari says, “In the eighteen months I have been sailing with James I have seen many characteristics and traits which will prepare him really well for a Vendée Globe campaign. He is tenacious, he is very resilient and he remains very calm when he is challenged, but also he very open minded and wants feedback he wants to improve and get better. With someone so young he has a huge future ahead of him." 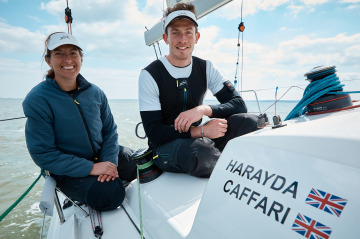 © Gentoo Sailing TeamUnlike some of the new, young generation of Vendée Globe racers the gruelling solo, non-stop race around the world was never really Harayda’s immediate goal. As a former dinghy and sports keelboat racer who grew up sailing in Singapore before turning to IRC and one design offshore racing.  It was the announcement that mixed double handed offshore racing would be on the Olympic slate for Paris 2024 that really piqued his interest.

With the goal of making it to the 2024 Olympic regatta in Marseille, competing offshore there, he paired up with Caffari in a SunFast 3300 for a successful two year programme which culminated in twice winning the British 2 Handed National Championship and sailing many thousands of valuable offshore miles.

But his Olympic dream was shattered when the news came that the IOC had effectively broadsided the possibility of double handed offshore racing at Paris 2024. But conversations with Caffari and Alex Thomson persuaded him that the 2024 Vendée Globe was actually a realistic proposition. Thomson was of course the original owner and skipper of the IMOCA Harayda now has, the boat being built in England as Hugo Boss.

“It is not a race winning boat but it pretty much perfect for my first Vendée Globe. It seems like the right boat, pretty much bullet proof and built strongly for Alex originally. We have a couple of small things to do but will be getting straight into sailing next week. That is so exciting.” Enthueses Harayda. And the ever enthusiastic two times Vendée Globe racer Le Diraison who finished 18th last year has been a great help and will continue to be so,

“Stéphane is great. He could not have been more helpful and is super transparent. For me not being based in France and indeed not being part of the Lorient community he has been great helping getting bits of work done there.  I am looking forwards to sailing with Stéphane over the coming weeks.”  Harayda smiles. 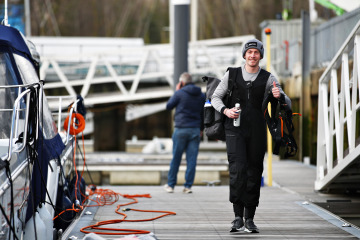 © Gentoo Sailing TeamDespite his lack of IMOCA and deep ocean experience he is realistic and driven, “I have done a little bit of sailing on the Hugo Boss boat which is a very different beast to this A Time For Oceans. I really understand what the transitioning to the IMOCA will entail. The shorthanded sailing will be OK I think but it is will be managing the 60 and how to tame it that will be the challenge.”

And Caffari has been careful not to sugar coat the idea of racing the Vendée Globe, “Over our two years sailing she told me many stories about her doing the Vendée Globe and that really did increase my interest. So we sat down and made a decision what to do next after the Olympics thing folded. I could have done a Class40 or another class but the sad fact is there would be very little media exposure in the UK doing a Class40 and the budget is basically the same doing a good Class40 as doing a ‘budget’ IMOCA programme.  And I spent two months sailing Hugo Boss with Alex Thomson  and he really also seemed to think it was a good idea. It all took shape recently but it is something I wanted to do for a long time.” He explains.

“ Dee has warned me getting to the start is the hardest part but she says she had such an amazing time doing it. Her campaign was relatively short notice and so she has been very supportive in the belief that getting to the Vendée Globe from here is fine, it is achievable as long as we can find a little bit of money. So she has told me some great things but also some scary stories like when she was up at the top of the mast and could not get down for an hour or whatever it was, She is very encouraging.”

His immediate work means he won’t make early May’s Bermudes 1000 race. The first big race will be fully crewed Round Britain and Ireland fully crewed in August. Haraya expects to announce a couple of experienced IMOCA sailors to join the programme.  Four IMOCAs are expected to do the RORC race Pip Hare’s Medallia, Swiss skipper Olli Heer has a similar vintage IMOCA and Sam Davies is believed to be planning to do the race to shake down her brand new Initiatives Coeur.  The first IMOCA Globe Series race will be the Defi Azimut before the preparation and planning for the season’s main goal the Route du Rhum Destination Guadeloupe

“It is going to be a very busy season.” States Harayda, “ Just learning to sail the boat well will be the biggest challenge but I plan to go off for a week at a time and just sail as many miles as I can, not always solo. It will be a big learning experience.”

He grew up sailing dinghies sailing Bytes and Lasers and moved into keelboats like the SB20 before doing crewed offshore racing  like the Sydney Hobart, the Middle Sea Race, the Caribbean 600.

“I raced on everything from 30 footers to 60 footers and then when the Olympics were announced decided to transition into that as it seemed like there would be training and a pathway which did not exist in the UK in shorthanded sailing. That was the entry into the shorthanded world then two years with Dee. Then itwas taken out our hands.”

They are looking for additional funding through partnerships, “We are looking to get a couple of tiers. We would like a title sponsor and a second tier so that would allow us to operate to the full extent that we would like to. We have some individual support also.”

Meantime the boat will be sailed from Lorient before it is brought back to the UK, Harayda being firm that this is very much a British based and run project. 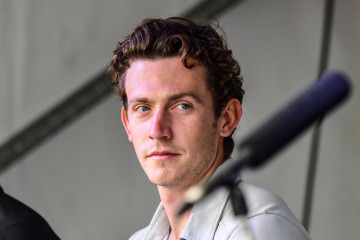 © Gentoo Sailing Team“ The boat is in Lorient and I hope to sail out of there until May. We will then hopefully bring the boat back to the UK maybe to Victoria Quay in Gosport which is quite a new facility. It looks really good with infrastructure there which would support an IMOCA campaign like we have not really had before and I think we might have another IMOCA there too which would be nice to have someone else to train with. I do want to keep this as a British entry. I don’t want to be quite as hard core as Alex Thomson was I do want to go to France and do some of the French races.”

Alex Thomson is helping him from a distance from his Jersey home. He is giving advice and support but Harayda has a sailing team with IMOCA experience,

“In the next couple of weeks we will announce a sailing team with a couple of people with good IMOCA experience who are experts in their own field. That will be key for me to have the right people around who have the right experience.” Harayda notes

Caffari concludes, “ I think it is really important that he develops as his own sailor and that he does not copy or model himself on anyone. He is massively inspired and enthusiastic and gets over excited but one of my jobs for his campaign is to make it all realistic, to make him understand what he is taking on, make him prepared for what he is taking on and it won’t come as a surprise. I am looking forwards to sailing with him on a bigger boat but I think he has the potential to spring a surprise.”

In the absence of a short handed offshore pathway in the UK Harayda has founded the Gentoo Sailing Team Youth Programme which Caffari is involved with. Twenty sailors aged between 16 and 23 have been selected and have already started training most recently with three SunFast 3300s. These sailors will get on and off the water coaching as well as racing experience on RORC and JOG offshore races, the idea being to give the next generation of offshore sailors strong foundation skills and experience to set them off on their individual careers. Hopefully among them might be the next generation of British Vendée Globe racers, already inspired by the likes of Caffari, Sam Davies, Alex Thomson, Pip Hare and now James Harayda.