What is the Azimut-Lorient Agglomeration Challenge? "It's something of a happiness machine," laughs Jean-Marie Corteville, the organizer. From Wednesday to Sunday, racing out of the ‘Sailing Valley’ – this section of Breton coast where more than 200 companies and 1,000 people work for in ocean racing - 14 IMOCAs took part in the 11th edition of this annual event.

It was also an ideal opportunity for many teams to get together and invite their partners and have their technical teams on board. It was a special opportunity given that the Transat Jacques Vabre is on November 7.

APIVIA, a show of strength 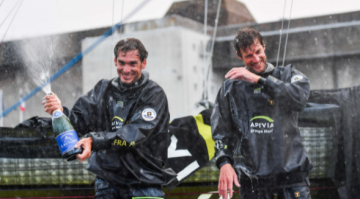 From the point of view of pure sport, "the level is excellent" summarized Jean-Marie Corteville. "We can see how the duos are trained, their settings are optimised and mistakes are rare". In each of the three competitions, a bit of a Vendée Globe feeling was evident.

"We have few opportunities to compete against each other, it was nice to feel that adrenaline," said Justine Mettraux (11th Hour)

The most obvious aspect was the domination of APIVIA. In the wake of their victory at the Rolex Fastnet Race a month ago, Charlie Dalin and Paul Meilhat won the main event, the 48H Azimut and then finished 2nd in the Tour de Groix.

“During the race’, I felt like we were operating together as if we had known each other for ten years, ”says Charlie Dalin. “ We hardly need to talk to each other, we understand each other straight away.” 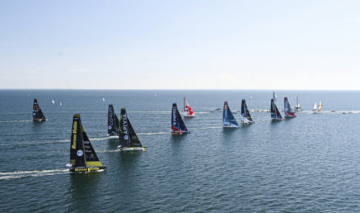 And some very good outsiders
The duos were able to tackle a particularly demanding course with a variety of conditions before the upcoming transatlantic race.

"There was an intensity comparable to what we are going to experience at the start of the Transat Jacques Vabre", suggested Thomas Ruyant, 3rd with Morgan Lagravière. The LinkedOut skipper recognizes APIVIA's level. “They will be the boat to beat".

There are numerous underdogs as these 48 hours proved. Among the surprises Justine Mettraux and Simon Fisher (11th Hour), aboard the ex-HUGO BOSS, took second place. The Swiss sailor said: “We had a good range of conditions: light winds, a headwinds of 25 to 30 knots, downwind… For us, the results are very positive, we have a great understanding between us and a good balance on board. "

Bureau Vallée 3 (Louis Burton-Davy Beaudart) and Arkea-Paprec (Sébastien Simon-Yann Eliès)  made up the 'top 5' of the 48H Azimut. And there was a good third place by Initiatives Cœur (Sam Davies-Nicolas Lunven) on the Tour de Groix. All the time it is a matter of learning, debriefing and fine-tuning details, working on cohesion as a pair and gaining confidence on board.

"Despite everything, we have learned a lot" (Attanasio)

There were some problems too, some bigger than others. Manuel Cousin and Alexia Barrier on Groupe Sétin - 4MyPlanet jammed a daggerboard. Charlie Enright and Pascal Bidégorry had a link arm that connects the helm and the rudder break. “There have been some good things and some not so good for us,” says Charlie Enright. “But for us, the main thing was to show our potential and identify all the areas that we have to improve ".

On board Fortinet-Best Western, the tack on the headsail blew out and then the spinnaker exploded and got stuck in the foils. “Despite everything, we have learned a lot,” emphasizes Romain Attanasio. “We know that the trickiest thing is to find the right compromise between attacking and looking after your boat. "

That will be the goal of all the skippers who will racing the Transat Jacques Vabre. For the organizers of the Défi Azimut their mission is accomplished. And everyone is looking forward to next year when it will be a few weeks before the Route du Rhum 2022. "We will keep the same formula which is perfect," emphasizes Jean-Marie Corteville. “ We will undoubtedly see the 48H Azimut get tougher with more entries. We are expecting 25 boats and we know that 100% of the sailors present this year will be back in 2022.”