Home News Post-Route du Rhum: what about qualification for the Vendée Globe?

Post-Route du Rhum: what about qualification for the Vendée Globe?

Nine days after the arrival of Thomas Ruyant, the winner of this 12th edition of the Route du Rhum - Destination Guadeloupe, the last competitor, Oliver Heer, crossed the finish line. With his 84 hours of time redress given by the jury following the collision with DMG MORI Global One shortly after the start, he finished in 32nd position out of 34, with 4 IMOCA retirements in the race. With around ten hours to go before the deadline, he validated his qualifying race for the Vendée Globe 2024. Explanations.

The Ruyant-Dalin duel, announced as the favourites - on the boat they both raced in the previous Vendée Globe - has lived up to its promise. While he was solidly in the lead from the start of the race, Charlie Dalin (APIVIA) was finally caught by Thomas Ruyant (LinkedOut) three days before the finish in Guadeloupe. After a fierce battle, the skipper of LinkedOut who won the race. Jérémie Beyou (Charal) completes the podium with his new IMOCA. Kevin Escoffier (PRB - Holcim) followed him, followed by Maxime Sorel (VandB Mayenne - Monbana) and Paul Meilhat (Biotherm), all on board brand new boats. Proof that these machines have a bright future ahead of them! In 7th place, Justine Mettraux - the first woman - achieved a very good performance on Teamwork, the ex-Charal. The Swiss skipper was competing for the second time in the IMOCA class. 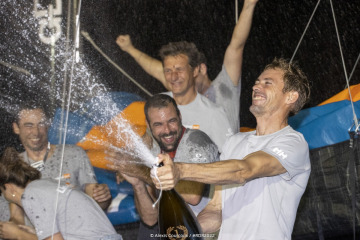 With the two qualifying races for 2022 now complete, it is time for the first review. If 14 sailors had already validated their qualifying race by completing the Vendée Arctique - Les Sables d'Olonne last June, 17 other projects have done so at the end of the Route du Rhum - Destination Guadeloupe.

As the qualification rule concerns the sailor/boat pairing, Éric Bellion (COMMEUNSEULHOMME powered by Altavia), Thomas Ruyant (LinkedOut) and Charlie Dalin (APIVIA) have not validated their 2022 qualifying race. Indeed, the IMOCA boats on which they should compete in the next Vendée Globe are still under construction.

Rodolphe Sepho (Rêve de Large - Région Guadeloupe) and Nicolas Rouger (Demain c'est loin) have unfortunately not validated the Route du Rhum as a qualifying race, as their race time is greater than that of Thomas Ruyant multiplied by a coefficient of 1.5. However, all the participating skippers gained miles for a possible selection.

All the projects that have validated a 2022 qualifying race will have to start a qualifying race in 2024, The Transat CIC or the New York Vendée - Les Sables d'Olonne to be qualified for the next Vendée Globe.

Projects that have not validated a qualifying race in 2022 will have to validate the 2023 qualifying race, the "Retour à la Base", the return race of the Transat Jacques Vabre, in solo.