For the first time, two sailors completed the race in less than 80 days.

François Gabart and Armel Le Cléac'h fought an incredible duel around the world, finishing after 78 days at sea with just three hours between them in Les Sables d'Olonne. Here’s what happened.

For the first time, two sailors completed the race in less than 80 days. François Gabart and Armel Le Cléac'h fought an incredible duel around the world, finishing after 78 days at sea with just three hours between them in Les Sables d'Olonne. Here’s what happened.

Twenty skippers were there at the start on 10th November 2012. The only woman racing, the British sailor, Samantha Davies was in great demand, as were Vincent Riou, Marc Guillemot, Armel Le Cléac'h, Jean Le Cam and Mike Golding… After the start, Bertrand de Broc had to head back to the harbour to repair damage after a collision. He would set off again. That was not the case for Marc Guillemot. His Safran lost her keel after just five hours of racing. In the lead, they sped across the Bay of Biscay: François Gabart, Armel Le Cléac'h, Jean-Pierre Dick and Bernard Stamm were the frontrunners. After two days of sailing, Kito de Pavant collided with a trawler and was forced to retire. Two days later, the same thing happened to Louis Burton. On 15th November, Samantha Davies’s Saveol was dismasted. On 18th, Jérémie Beyou retired, when his keel jack broke.

By the Canaries, a group of six had formed at the front with Armel Le Cléac'h, François Gabart, Jean-Pierre Dick, Vincent Riou, Bernard Stamm and Alex Thomson. Mike Golding was already some 300 miles back. At the Equator, Armel Le Cléac'h was 5 hours ahead of François Gabart, Jean-Pierre Dick and Vincent Riou. On 21st November, the Polish sailor, "Gutek" Gutkoswki threw in the towel after suffering from autopilot problems. Ten days after the start, there were only fourteen left. The Doldrums and the fresh wind on the other side saw two groups in front with the six aforementioned and three chasing them 300 miles back, the Breton sailor, Jean Le Cam, the Swiss sailor, Dominique Wavre and the British sailor, Mike Golding. Rounding the St. Helena high seemed to be going smoothly, when there was another upset. On 24th November off Brazil, PRB hit a marker buoy that had drifted out to sea, forcing Vincent Riou to retire.

The leaders covered 500 miles or more each day. There were now three races within the race with the five frontrunners, the three chasers and the five holding on at the rear, Arnaud Boissières, Javier Sanso, Bertrand de Broc, Tanguy de Lamotte and the Franco-Italian, Alessandro di Benedetto. At the Cape of Good Hope, Armel Le Cléac'h set a new intermediate record of 22 days and 23 h, with a very slight lead over his nearest rivals - 3 hours ahead of Jean-Pierre Dick, 4 ahead of François Gabart, 6 ahead of Bernard Stamm. They were into the Indian Ocean. At high speed – between 20 and 22 knots – there was an incredible fight going on at the front between each ice gate. On 10th December, François Gabart set a daily record of 534 miles. He was just behind Armel Le Cléac'h. As the duel continued, the two Figaro racers grabbed a few extra miles from Jean-Pierre Dick and a few more from Bernard Stamm and Alex Thomson.

Le Cléac’h and Gabart fly away

Le Cléac’h and Gabart manage to hop onto a slightly more favourable weather system, but they were the only ones. In four days, their lead extended rapidly. On 14th December, Jean-Pierre Dick was 300 miles behind. To the south of Australia, the duel was relentless between François and Armel. Behind them, a desert. Directly south of New Zealand, Jean-Pierre Dick was still in third place, but with a deficit of 600 miles. The duo Stamm-Thomson were 900 miles behind the frontrunners. Bernard Stamm was forced to carry out a pit stop in the Auckland Islands to attempt to repair his hydro-generators, but this was to turn into a nightmare. Cheminées Poujoulat dragged her anchor and Bernard was forced to go alongside a Russian scientific vessel to avoid running aground. Without being asked to do so, a sailor on the latter jumped aboard Cheminées Poujoulat. The Jury considered that counted as assistance and Bernard was disqualified. He would carry out further pit stops in Dunedin and then after Cape Horn, but would manage to complete the round the world voyage although not ranked.

The first four places were already determined by the Pacific. On 1st January, François Gabart rounded the Horn 80 minutes ahead of Armel Le Cléac'h. He had a lead of a day and a half over Jean-Pierre Dick in third place and two days over 4th placed Alex Thomson. When Armel and François were climbing back up the Atlantic, six boats were still in the middle of the Pacific, two others had just begun the crossing and Alessandro di Benedetto at the rear was to the south of Australia – an ocean apart. The first week of 2013 was the turning point. Firstly, a technical problem with his gennaker meant that Armel Le Cléac'h lost a few miles to his rival, forcing him to go on the attack. He did this by tacking to the west, but François Gabart was in control. The gap widened gradually as they made their way up the coast of Brazil. François Gabart did not make any mistakes and sailed fast. He was now 100 miles ahead, then 250… He just had to find his way around the Azores high, but it was not simple. Armel Le Cléac’h got back to within 90 miles. There was another incident on 22nd January, when Jean-Pierre Dick announced that he had lost his keel. His hope of making it to the podium vanished. Alex Thomson changed course to stay with him, just in case. "Thanks, Alex, look after your third place,” JP replied. At the front, the fight continued over the final thousand miles, but Macif held on to the lead.

On 27th January 2013, overwhelmed by the excitement, François Gabart entered the harbour entrance channel in Les Sables to the applause and cheers of a huge crowd. The skipper of Macif became the youngest winner of the Vendée Globe and the first to finish in less than 80 days: 78 days, 2 hours, 16 minutes and 40 seconds. Michel Desjoyeaux’s record was shattered by almost six days. Three hours later, Armel Le Cléac'h was honoured by the crowds in similar fashion. He finished the Everest of the seas in second place for the second time in a row. Alex Thomson took third place 2 days and 17 hours later. Jean-Pierre Dick, without a keel, managed to stay in fourth place, but meanwhile, Javier Sanso had capsized in the Azores. Jean Le Cam finished in fifth place on 6th February, 9 days and 21 h after the winner. In all, eleven sailors were ranked. Alessandro di Benedetto, one of the public’s favourites, would finish with amazing celebrations on 22nd February after 104 days at sea. 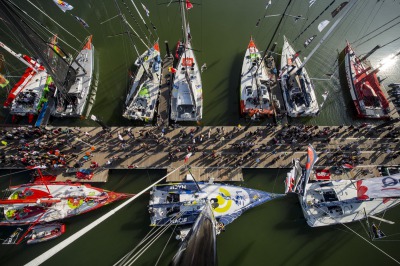 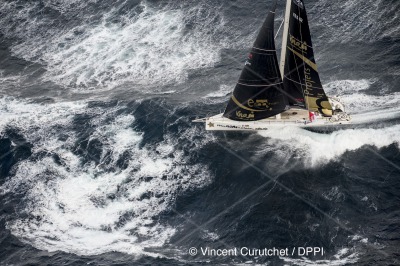 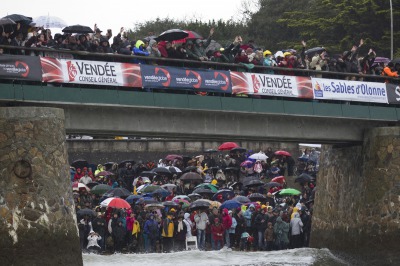 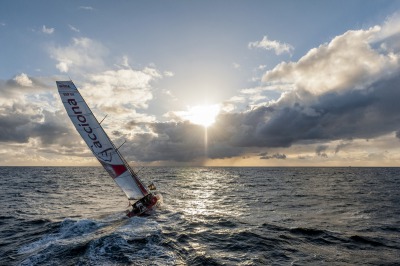 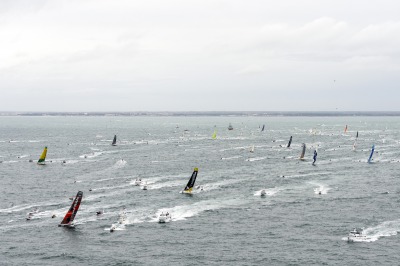 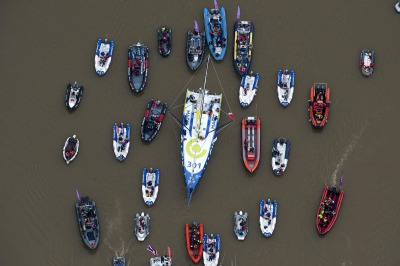 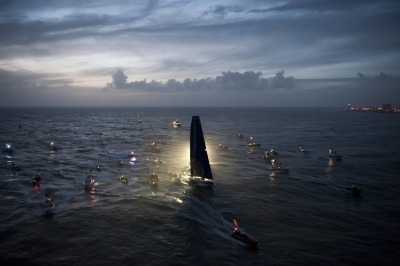 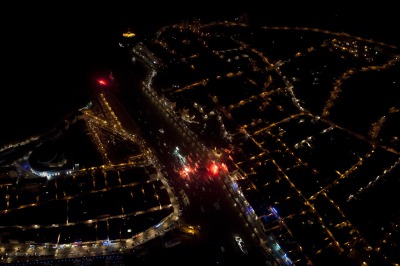 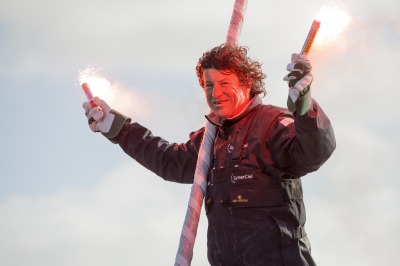 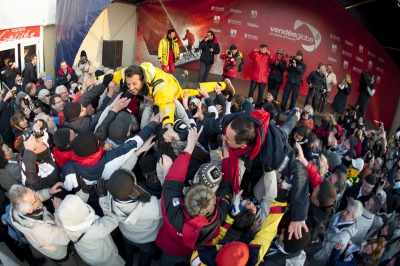 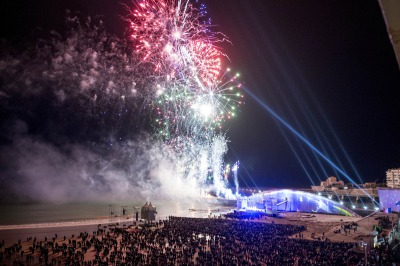