Home News Rodolphe Sepho, on the long course from growing up on his native Guadeloupe to the Vendée Globe.

Rodolphe Sepho, on the long course from growing up on his native Guadeloupe to the Vendée Globe.

Rodolphe Sepho is a 36 year old sailor from Guadeloupe who has the Vendée Globe as his next major target, a big step up from the solo Route du Rhum which he has completed three times now a mythical race which of course links Saint Malo with his native Caribbean island.

He has also completed the last Transat Jacques Vabre transatlantic. Many Guadeloupean sailors over the years have been inspired by arrival of the Route du Rhum and all the colourful characters telling their stories on the race pontoons in Pointe-a Pitre, but Sepho is the first to really set his sights on the solo non stop race around the world and becoming the first Guadeloupean to complete the race.

Sepho grew up in Goyave in Basse-Terre where he became involved with a sailing club, Voile 44. "I saw sailing boats before I saw real football pitches," he laughs.

Affable, charming and always smiling the Guadeloupean recalls his childhood memories of dinghy sailing then Optimists, windsurfing, then sports catamaran,

But it is every four years that the Route du Rhum makes the imagination run wild as the sailors arrive from France. The race is such a popular celebration, special memories etched into the hearts of the Guadeloupeans. Rodolphe admires local sailors like Jimmy Dreux, Jean-Noël Victor, Claude Bistroquet as well as the French stars such as Michel Desjoyeaux, Roland Jourdain who have inspired him over the years.

Unlike many who can be met on the pontoons who have been able to follow a well trodden pathway in France for example, Rodolphe really has had to fight to be part of the ocean racing mix. Beyond the comparative lack of resources and training pathways on the island there are reasons. In his early years of racing, his extended family and in particular his parents really did not want him to take up ocean racing as his sport.

Behind their resistance is the complex relationship that West Indians have with the sea. The ocean was of course the route for the deportation of slaves and so there was a very real need to turn their backs to the sea and look inwards to the land.

“Culturally, the sea is a source of a lot of pain for generations of families,” explains Rodolphe. 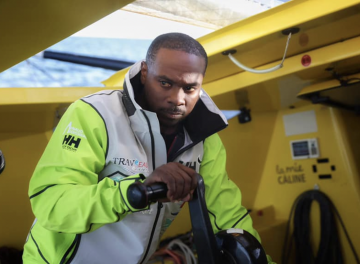 And so despite such a favourable natural environment on the doorstep the sport of ocean sailing has struggled to develop. Its image as a sport reserved for expatriates and requiring money did not enhance his chances as a native who was born on the island and who has spent most of his life there.  “But things do evolve it moves, it changes", smiles Rodolphe.

It is his sailing club that has allowed him to follow the dream of racing offshore. In 2010, the association acquired a Pogo 40 and, supported by the region, he set off for the Route du Rhum. Jimmy Dreux was part of the adventure and Rodolphe finished 37th getting a real taste for the wide open ocean and sailing solo.

He talks of "the exceptional feeling of freedom".

Rodolphe then took on the boat, raced the RORC Caribbean 600 (4th in 2013) and competed again in the Route du Rhum (26th, 2014), learning more by sailing with Aymeric Chapelier and Kito de Pavant. Then he bought the FS40 Class 40 from Jörg Riechers and Pierre Brasseur, joined the Pôle Vendée Course and returned to the ‘Rhum’ (20th in 2018).

It was while preparing for the Rhum that he met up with Arnaud Boissières. And 'Cali' welcomes him to his yard gives him technical advice and helps him to find sponsors.

"He always has a benevolent look and the desire to help", smiles Rodolphe And then “over a beer” Cali encouraged him to “buy his boat at the end of the last Vendée Globe”.

And although the dream burns bright and drives him ever harder and further he wants to make sure he makes the right steps to ensure he is fully ready for the huge undertaking. He likes to call himself "cautious" and wants to give himself the best chance possible of finishing, while all the time knowing how difficult it will be this time especially to simply get to the start.

So the Guadeloupean is advancing step by step, ticking off the boxes in strict sequence rather than there being any presupposition that he will be on the start line just because he wants to be and has a boat.

“I want our approach to be significantly different from other skippers,” he says. “Before announcing I’ll be in the race I prefer to be myself and to tick all the boxes ”.

Among these "boxes", there was the acquisition of an IMOCA, La Mie Câline-Artisans Artipôle. There was also getting started into IMOCA races, so that was the Défi Azimut and the Transat Jacques-Vabre, benefiting from the support of co-skipper ‘Cali’ to finish 16th).

“It was a real fast track learning experience, a great way to learn how the boat works, how it reacts and all its little tricks”. Boissières, who is also preparing a return to the Vendée Globe, has taken on "almost a coaching role" and made sure his Guadeloupean counterpart had plenty of time on the helm. 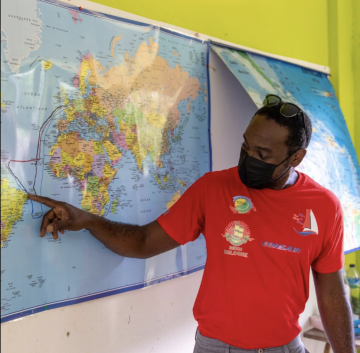 And so Rodolphe is progressing patiently but as he passes down the track he notes that he has become the first Guadeloupean to notch up three participations in the Route du Rhum, he is the first to complete the Transat Jacques-Vabre, the first to cross the Equator in a race on an IMOCA.

But there is a particular pride in his heart as he seeks to carry the hops of the island on to the seas of the globe. He is an educator, a spearhead of the association 'Rêve de large', he visits young people to raise awareness of the "magic of an ocean crossing" and explains that the sea can be so beneficial to wellbeing generally and contribute to becoming a way of life.

On land, Rodolphe fights for the young Guadeloupeans to get into the sport, recognizing a "responsibility to democratize this sport, to push young people to dare more". When Rodolphe speaks with a warmth in the tone of his voice and enjoying the pleasure of fighting his battles - for young people with broken families, for the development of sailing and to describe what it feels like to be offshore. Already it immediately obvious here is a sailor who is different embodying a particular humility, duty and attentiveness as befits a future Vendée Globe racer so well. Through his words and his journey he already ticks many of the boxes.